Working Around Phoney SSL Certificates on iOS With OpenSSL

Following our last post on the basicConstraints vulnerability in Apple's iOS certificate validation, we developed a proof-of-concept app* that implements a better workaround, with some help from OpenSSL. The source code is available now at https://github.com/akgood/iOSBasicConstraintsWorkaround.

At a high level, our workaround functions by first using iOS's built-in frameworks to validate a certificate chain for an SSL connection, and then - if iOS determines that the chain is valid - double-checking its result using OpenSSL. In this case, both implementations are slightly incomplete: iOS, as we now know, fails to check basicConstraints; meanwhile, our relatively simplistic OpenSSL verification routine does not bother to - for example - check that the leaf certificate's hostname matches the URL request. Running these two checks in sequence, though, we should have everything covered.

The code we released contains a fully-functional test app, which both demonstrates how to use OpenSSL to double-check the results of Apple's security framework (i.e. from a SecTrustEvaluate function call), and one method to hook a Cocoa network I/O mechanism (in this case, NSURLRequest) to augment the default certificate validation mechanism. In the sample app, users can enter a URL and attempt to request it; the text area at the bottom will then show the result of the request. Requests to any site with an invalid certificate chain - including ones that attempt to exploit the basicConstraints flaw (for example, SpiderLabs' test site at https://ssltest.spiderlabs.com) - will fail. 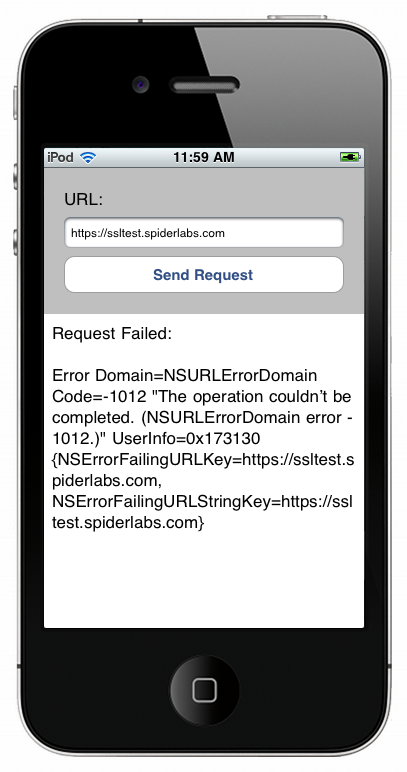 There are a few notable drawbacks with this implementation:

We hope that this code - or at least, the general approach it identifies - will be of some use to the community. Any suggestions for improvement are welcome!

* This product includes software developed by the OpenSSL Project for use in the OpenSSL Toolkit (http://www.openssl.org/), and includes cryptographic software written by Eric Young (eay@cryptsoft.com)