Original Equipment Manufacturers (OEM) refer to the first boot of a new PC as the out-of-box experience (OOBE). As you battle your way through modal dialogues for questionable software, and agree to some exciting 30 day antivirus trials, it's pretty forgivable to want to throw your brand new computer through the nearest window.

Today, Duo Labs is publishing our take on the OOBE; Out-of-Box Exploitation: A Security Analysis of OEM Updaters. Shovelware, crapware, bloatware, “value added” - it goes by a lot of names - whatever you call it, most of it is junk (please, OEMs, make it stop). The worst part is that OEM software is making us vulnerable and invading our privacy. Issues like Superfish and eDellRoot make us less secure and are often easy to abuse in practice. With that in mind, Duo Labs decided to dig in to see how ugly things can get.

One of the major things we found was the presence of third-party update tools. Every OEM we looked at included one (or more) with their default configuration. We also noticed that Microsoft Signature Edition systems also often included OEM update tools, potentially making their distribution larger than other OEM software.

Updaters are an obvious target for a network attacker, this is a no-brainer. There have been plenty of attacks published against updaters and package management tools in the past, so we can expect OEM’s to learn from this, right?

Spoiler: we broke all of them (some worse than others). Every single vendor had at least one vulnerability that could allow for a man-in-the-middle (MITM) attacker to execute arbitrary code as SYSTEM. We’d like to pat ourselves on the back for all the great bugs we found, but the reality is, it's far too easy.

Here is a quick breakdown of basic features from some of the updaters we looked at: 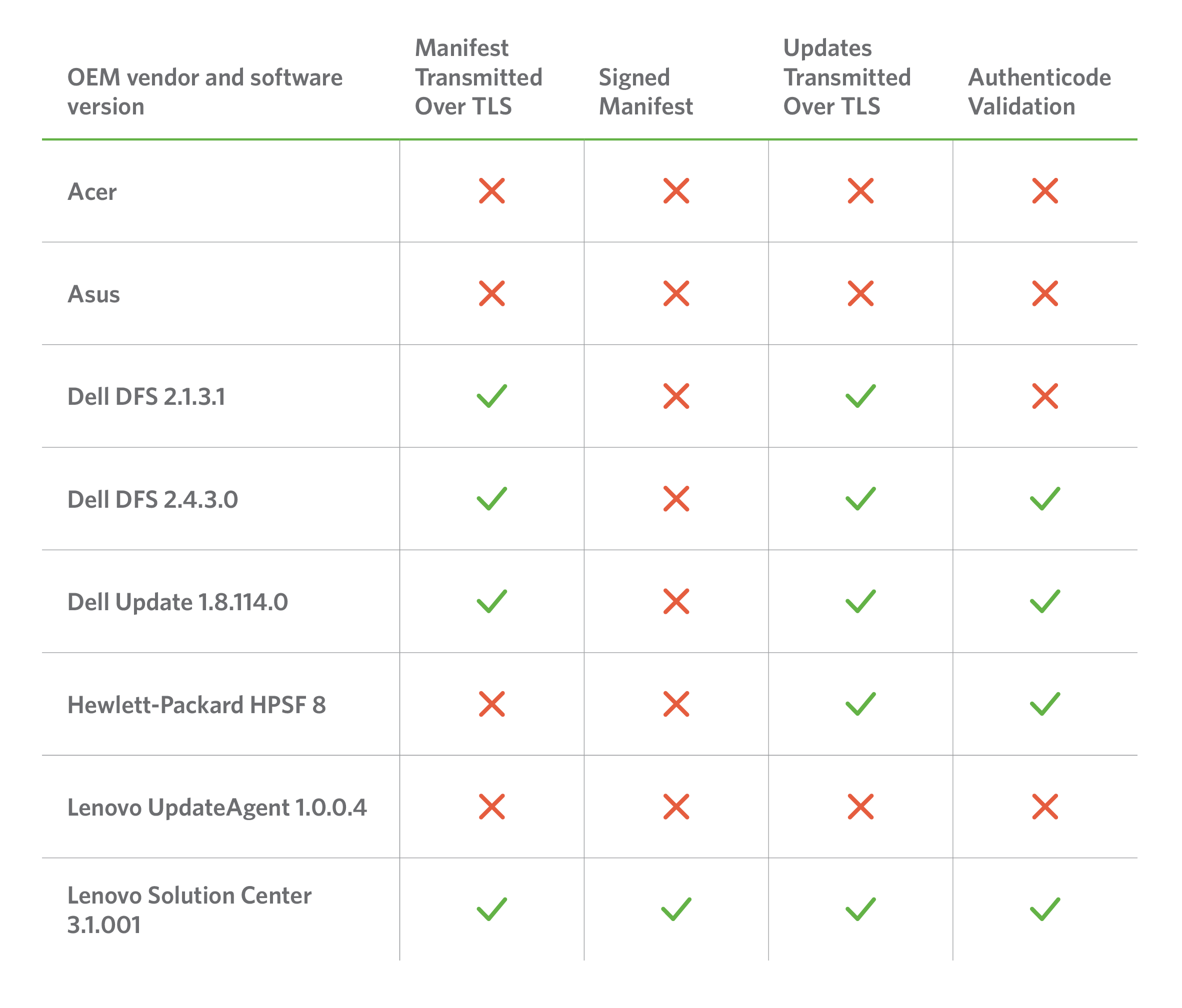 Some vendors made no attempts to harden their updaters, while others tried to, but were tripped up by a variety of implementation flaws and configuration issues. In total, we identified and reported twelve unique vulnerabilities across all of the vendors, and identified a number of concerning trends:

The most notable vulnerabilities we found can be summarized as follows:

Download Out-of-Box Exploitation: A Security Analysis of OEM Updaters to read our complete analysis and deep dive into the issues we identified, including more about the vulnerabilities we found.