In the face of popularized security gaffes like Superfish and eDellroot, consumer-facing technical outlets sing a common refrain: “Microsoft Signature Edition is the way to go!” 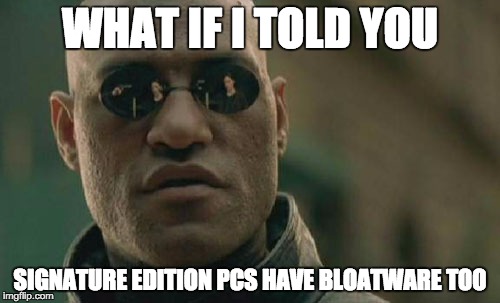 There are a myriad of articles in any language of your choice about Signature Edition, and they all invariably contain a sentence along the lines of, “Microsoft controls the software that ships on these PCs, and they strip out the worst stuff to ensure you have a clean copy of Windows with only useful utilities and drivers,” according to HowToGeek.

It’s true that Superfish software wasn’t packaged on Lenovo’s Signature Edition laptops, but what does Signature Edition really mean? Are there other aspects of these devices putting users at risk? As you may have already seen, we have spent some time analyzing the attack surface of Original Equipment Manufacturer (OEM) Laptops, including a few Microsoft Signature Edition models.

As part of our project, we purchased Signature Edition laptops manufactured by Hewlett Packard (HP), Asus and Dell. These were all purchased directly from Microsoft. We decided to compare these to non-Signature Edition systems from the same manufacturers to figure out what exactly consumers are getting when they purchase these systems.

Additionally, after the release of our paper, we saw that other people were interested in Signature Edition as well. This prompted us to travel to Microsoft Retail Stores to take a look at some brands we missed in our initial analysis. We only used the in-store retail demo units for these, however we were assured by employees that they were the same as what you’d receive in the sealed box. Our process for analyzing the retail units was to first obtain administrative access, then run a couple quick checks to identify pre-packaged software: a full file listing (DIR C:\ /B /S) followed by running SysInternals’ autoruns tool. We then searched these listings for any indicators of pre-packaged software. Unfortunately, we did not capture the model numbers for all the in-store units we checked out.

Potential drawbacks of analyzing retail machines are that employees or customers may have tampered with them, however the overwhelming majority had Faronics Deep Freeze present to restore their hard-drive image as well as artifacts of OEM software. It seemed like the only steps employees took (also validated by employee statements) were to boot the machines, activate the “secret” Retail Mode, and install Deep Freeze.

We spoke to numerous Microsoft employees as part of this process and were told the same things by all of them: every single laptop sold by Microsoft directly or in a Microsoft Store is a “Signature Edition” laptop, and this means it is “free of bloatware”.

It is our recommendation that Microsoft get more involved in the Signature Edition process, providing more guidance for and monitoring of OEM images. We consider their Surface Book machines the "gold standard" for a Windows 10 machine -- no annoying third-party components, no proprietary updaters, nothing but Windows and hardware support tools.

The only constant we saw across the board for Signature Edition was the lack of marketing tie-ins and trials of third-party software, which were a major annoyance on the non-Signature machines. This is to be applauded as a step in the right direction, however, some third-party and proprietary software of little value still found itself on many of the Signature Edition machines, including some vulnerable updaters.

For Acer, we only examined in-store retail units. We didn’t see anything pre-packaged besides software to support the Realtek audio hardware.

However, there's a C:\OEM directory with an install script that we didn’t pull a copy of: C:\OEM\Preload\DPOP\OEMCustomize\Acer_Install.cmd.

We hope that boxed Signature Edition Acer units are the same as the retail demo unit. As we did not purchase one, we cannot say for sure, and when testing other brands we saw differences between purchased units and retail units. Assuming that the boxed units match the retail unit, they’ve done a very good job of stripping the system down.

Alienware has Signature Edition laptops for sale at the Microsoft Store. We didn't purchase one, but we did investigate one at the Store. We quickly became suspicious that the employees had customized the system as it had Steam installed on it and screenshots of gameplay from months back. Faronics Deep Freeze was also not present on this system.

It had the same basic recovery and support files as the other Dell system we checked out at the retail Store. Nothing exciting. No PC-Doctor present. We didn’t even find any l33t gamer software to make your backlights strobe to dubstep while pwning n00bs. If this is what their boxed systems are like, great job, Alienware!

For Asus, we looked at two models:

The standard non-Signature Edition system, just like the others, contained a large amount of third-party software from a wide range of vendors, as well as Asus-developed update tools, in which we identified multiple security vulnerabilities.

The Signature Edition shipped with scheduled tasks for functionality related to some hardware features: ACMON.exe, USBChargerPlus.exe, AsusTPLauncher.exe, AsPatchTouchPanel64.exe, SimAppExec.exe, but did not include the vulnerable Asus updater or the third-party applications and add-ons.

There was still some ASUS-developed software present, which increases the attack surface of the device, however, we have not performed a full audit of all of the ASUS components besides the known-vulnerable updater that was not present on the Signature Edition hardware.

For Dell, we had two systems. One Signature Edition and one traditional OEM version:

Much like the HP systems, the non-Signature Edition system contained the full suite of tools from McAfee along with other bundled third-party software that seems to only serve as a mechanism for the OEM partners to sell more unneeded software.

Looking at the scheduled tasks on the Signature Edition, we find Intel WiDi (Wireless Display) Software Asset Manager and Intel Update Manager software running, as well as a Realtek HD Audio service and Dell SupportAssist. We also found an Intel telemetry component running as a scheduled task, “lrio.exe.” We haven’t profiled this application to see what sort of telemetry data it captures and where it’s sent, as we were primarily focused on Dell’s support tools.

Software-wise, we find the computer preloaded with a handful of Dell apps: Dell Audio, Dell Power Manager, Dell QuickSet, and Dell SupportAssist. A C:\DELL\ directory existed with a log file within that indicated a Realtek audio driver update had recently been applied.

Looking deeper into Dell SupportAssist, we see that the executable is actually pcdrcui.exe and the signer is PC-Doctor, Inc., which suggests they licensed an off-the-shelf solution rather than writing it in-house like HP. 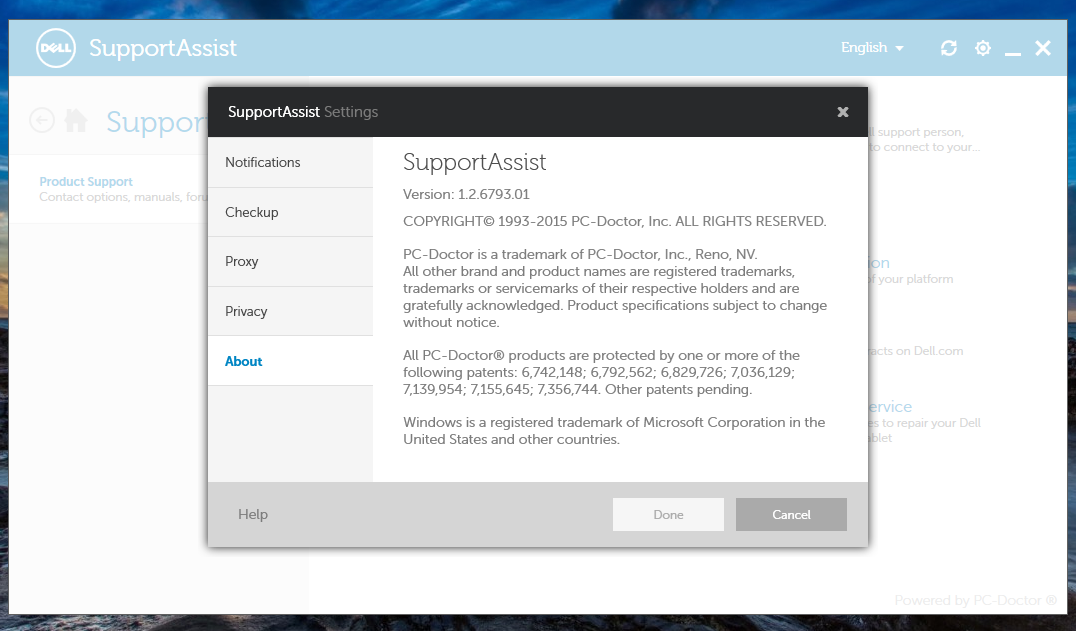 After running the pcdrcui.exe scheduled task for the first time, the task was deleted and replaced with two other PC-Doctor scheduled tasks: sessionchecker.exe and uaclauncher.exe, both living in the C:\Program Files\Dell\SupportAssist\ directory. A kernel-mode service was also created, based on the driver stored at C:\Program Files\Dell\SupportAssist\pcdsrvc_x64.pkms, signed by PC-Doctor, Inc. on Monday, May 9, 2011 with a SHA-1 digest.

The driver creates a device, \DosDevices\PCDSRVC with the characteristic FILE_DEVICE_SECURE_OPEN which may protect it from unprivileged access.

For custom URI handlers, we found the “intelwidi:” handler which triggers WiDiApp.exe, whose attack surface we did not have time to evaluate as we were focused on vendor-specific software. Overall, we did not see the same use of local HTTP servers and registry-based URI handlers that we saw in the HP software suite.

Dell SupportAssist (PC-Doctor) seemed less dangerous at first glance than other support frameworks we saw. It did not seem to have a built-in update downloader and installer; instead, it pulled a list of updates and prompted users to open their browser to Dell’s support pages to download and install updates manually. Additionally, the “DellConnect” support tool for remote access wasn’t installed by default, and required the user going to Dell’s site to install it. The tool mostly seemed to be a collection of links to other places with some basic diagnostic info.

However, we haven’t performed an extensive audit of the SupportAssist/PC-Doctor software. It may still be possible to exploit; for example, by MITMing the call to retrieve the update list, or through interactions with the device driver. Additionally, the use of kernel-mode code is risky and didn’t seem necessary from the limited apparent functionality of the application.

On June 2, 2016, I went to a Microsoft store and experimented with a demo Dell Signature Edition laptop. Unfortunately I did not note the model number and they left no indicators of it on the filesystem, but it had no Dell or PC-Doctor software present.

This was one of the cleanest systems we looked at. Here’s the result for every file on the disk with “Dell” in its name: