We just launched a new resource for the security community - a Security Conference Calendar to help you create your own schedule of great networking and educational conferences, complete with call for proposal (CFP) deadlines (most already passed for events in 2014, but check sites for 2015).

Our Security Evangelist, Mark Stanislav, hand-picked only the best events for 2014, and highlighted the events that Duo Security will be attending in green. Here’s our schedule for the year: 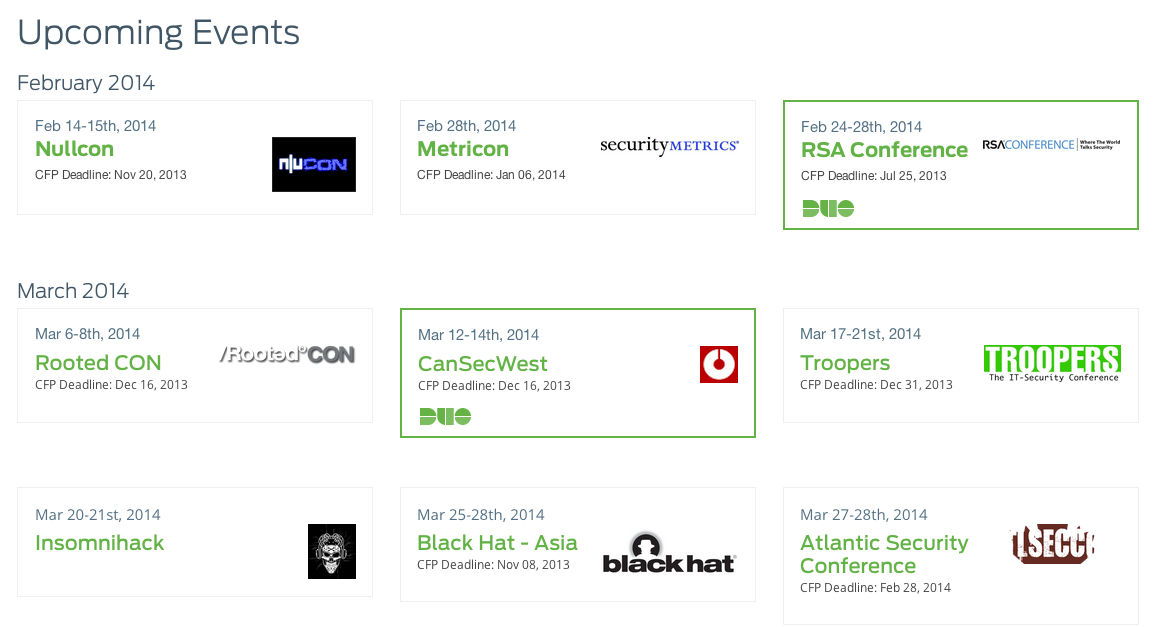 The RSA Conference is one of the largest information security conferences in the world. Duo Security will be attending the weeklong conference this month, as well as exhibiting at booth #2518.

Don’t miss Duo’s own Security Evangelist, Mark Stanislav, who will present his research on IP camera security on Friday, February 28th at 11:40 in Room 3006 (West).

Thotcon is a non-profit, non-commercial, small-venue hacking conference. Held on a single day with one track of speakers, the conference features talks on various information security and hacking topics.

Black Hat USA is an information security conference bringing together thought leaders from all facets of the infosec world, including corporate, government, academic and even undergroudn researchers. As a vendor-neutral event, Black Hat brings together the brightest in the world for six days of learning, networking and skill building. It is also a premiere venue for elite security researchers and the best security trainers to find their audience.

DEFCON is one of the world’s largest annual hacker conventions, originating in 1993. DEFCON attendees include computer security professionals, government employees, security researchers, hackers and more. The event includes session tracks, social events and contents on a variety of tasks, including lockpicking, robotics, scavenger hunts and more. Capture the Flag (CTF) is one of the best-known contests - featuring a hacking competition in which teams of crackers attempt to attack and defend computers and networks using certain software and network structures.

If you don't see one of your favorite events or feel that some of this information is inaccurate, please reach out to Mark Stanislav, who is maintaining this resource.