Our First Week As Interns 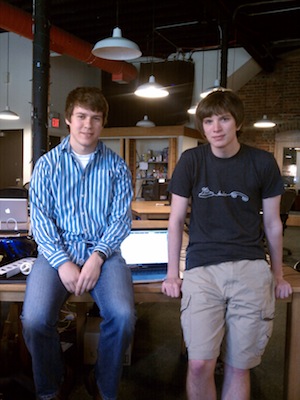 Call it a trial by fire: our first challenge was to build our own chairs, which quickly turned into a race. Jack may claim that he won, but I’d call it a tie - the point is, we aren’t chair people (we’re software people).

The next order of business was to get us caught up; They took us through their code base, set us up with their development tools, and had us chatting on irc with the team. We flew right through that part because of how excited we were to be here But the best part?

We wrote code on the first day!

What did we write? Stuff... and a whole bunch of it:

David: Starting out, I finished up a WordPress plugin that enables Duo login that I had started the weekend before and then worked together with Jack to get it styled up all pixel-perfect. This should be released shortly (open source yeah!) along with a guide to setting it up. The rest of the week, I spent some time further familiarizing myself with the existing code base and even committed code that fixed a small bug that had been floating around in the tracker for a bit!

Jack: Dug wanted us to get familiar with the Web API first, so I started by trying to write something for CodeIgniter. Although I added it to my own site, there is no common authentication system used by CodeIgniter developers, making a true plugin more difficult than I wanted.

After finishing up a generic CodeIgniter example, I decided I would try doing something with Drupal. I’ll admit, having never worked with Drupal I banged my head against the wall a few times... but I managed to get it done.

Besides all that I’ve been familiarizing myself with the rest of Duo’s code, writing a blog post, and writing a user guide.

We’re working on packaging up the plugins we wrote so that everyone can have some Duo goodness on their WordPress or Drupal site! We’re also working on detailed user guides to make it as easy as possible to install these on your website.

We’re excited to be working at Duo for the summer and you’ll be hearing more from us later this week!