ANN ARBOR, MI. -- February 8, 2017 -- Duo Security, the leading cloud-based Trusted Access provider and one of the fastest growing information security companies in the world, today announces financials publicly for the first time - reporting $73 million in annual recurring revenue (ARR) for 2016, a 135 percent increase from the $31 million achieved in 2015. This is the fourth straight year the company has more than doubled its ARR and the first year the company is cash-flow positive. 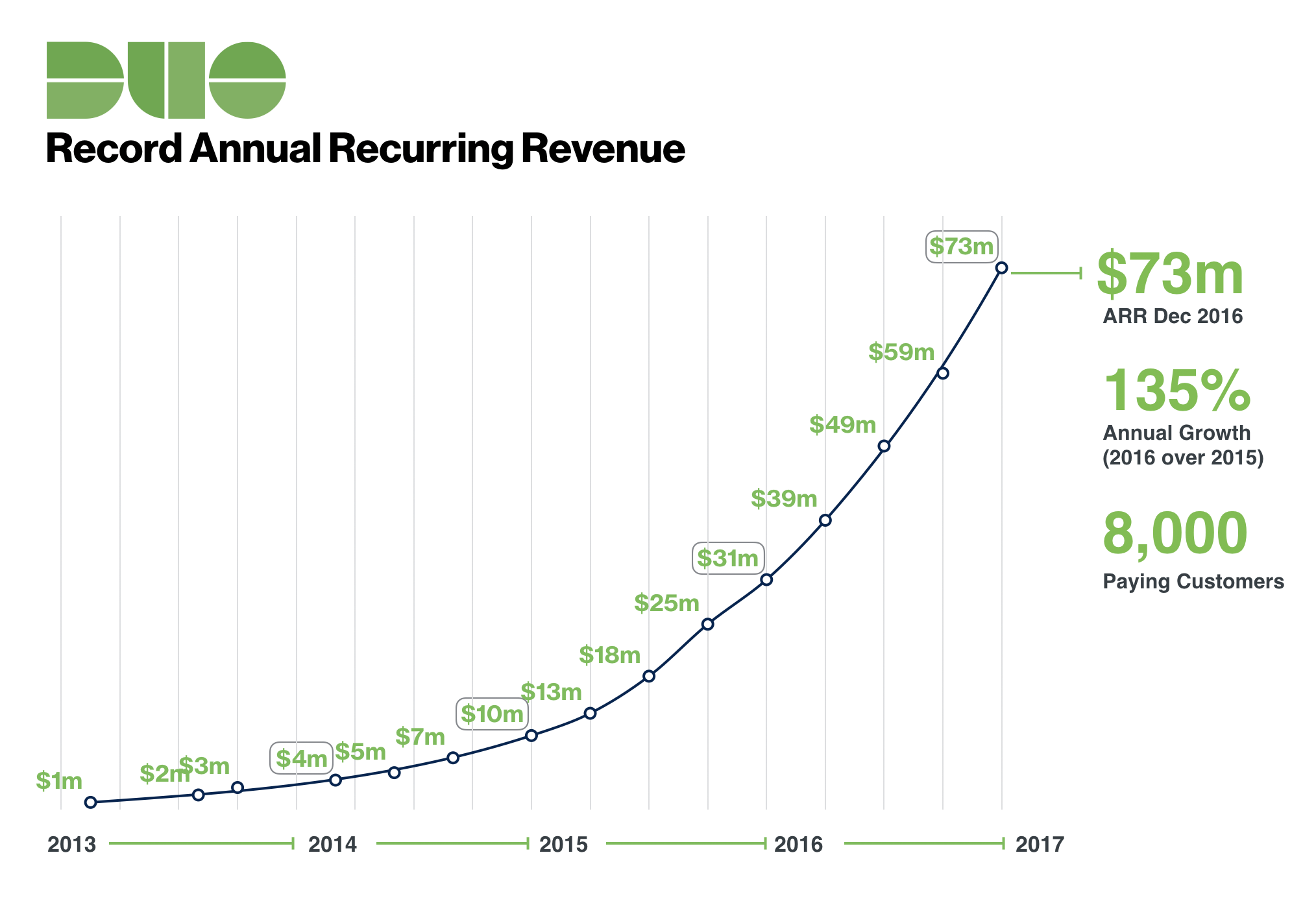 Quadrupling its user base to more than five million in 2016, Duo protects more than 8,000 paying customers and manages more than six million authentication events per day.

In conjunction with the company’s first-ever release of revenue figures, today, Duo unveiled Duo Beyond, the first major commercial implementation of Google’s BeyondCorp framework that drastically improves and simplifies the security management of how employees and devices access critical corporate applications. Information on a user’s physical location or network alone is no longer adequate in enforcing access security. With Duo Beyond, enterprise customers can allow for remote access to their on-premise resources without using a virtual private network (VPN) or network access control (NAC) application.

The Highlights of the ‘Most Loved Company in Security’:

Among Fastest Growing and Most Financially Efficient SaaS Companies Globally

Quadrupling User Base Across More Than 100 Countries

In addition to significant growth in its customer base, Duo added an office in Austin, Texas, complementing its Ann Arbor, Michigan; San Mateo, California; and London, England locations. It doubled its staff in 2016 from roughly 200 to nearly 400 and plans to hire more than 150 in 2017. Additionally, Duo is attracting security industry luminaries from across the tech spectrum such as:

While bringing on new customers with unique needs and resources, Duo has kept innovation top-of-mind and has continued to disrupt the traditional security industry with a slew of fresh offerings.

Dug Song, Duo’s CEO and Co-Founder commented, “This last year at Duo was one of exceptionally strong growth - both in revenue and offerings for our customers. With our focus on innovating - as seen by today’s launch of Duo Beyond, the first commercial implementation of Google’s BeyondCorp architecture - we are confident that Duo will continue to deliver exceptional offerings for our customers and deliver strong results.”

“With a 98% satisfaction rate and an NPS score of 68, we’re passionate about continuing to be the most loved company in security,” said Song. “Through continuous innovation, Duo works every day to help make security easy and effective.”