Protecting Against the Insider Threat

The insider - seemingly innocuous and a fairly small percentage of overall data breaches, but still a viable threat to any organization with valuable information such as payment card, financial, intellectual property and any type of proprietary business data. 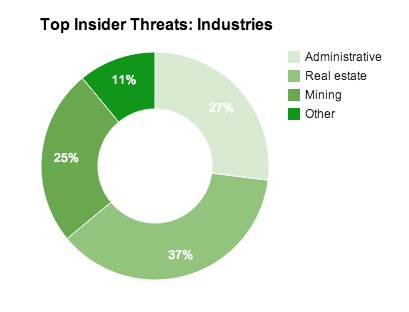 The report also found that most crimes committed by ‘trusted’ parties are perpetrated by financial or personal motives. However, in the past year, there’s been a marked shift toward insider espionage targeting internal data and trade secrets.

The report also shows an increase in a broader range of hacking tactics (though the report makes the distinction between actual changes in data vs. “increased visibility from insider-focused partners,” meaning the apparent increase could be due to the fact that more specific data was simply more available this year compared to last).

A recent survey from Lieberman Software Corp. measured a number of IT professionals and their attitudes toward password management and cloud security at a recent IT security conference. They found that just over 13 percent of IT security professionals admit they were able to access previous employers’ systems by using their old credentials, as reported in InformationSecurityBuzz.com. 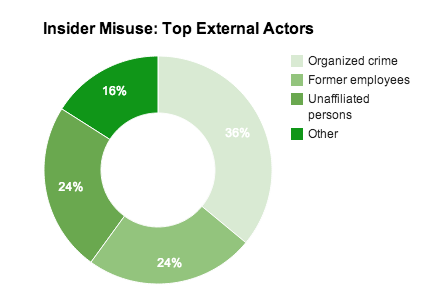 Another 23 percent can get into their previous two employers’ systems by using old credentials, while another 16 percent report they actually have access to all of their previous employers’ systems. Verizon’s DBIR backs that up by listing the top three external actors within their Insider Misuse category as those seeking to commit organized crime (36 percent), former employees (24 percent) and unaffiliated persons (24 percent), acknowledging that former employees often “exploit still-active accounts or other holes known only to them.”

While there’s obviously limits to what you can do when it comes to internal threats from current employees, with former employees, there’s the obvious: disable outdated user accounts immediately after employees exit the organization, especially administrators and other users formerly employed on your IT security teams.

The article and survey recommend a number of ways to safeguard against the threat of of former employees, including:

If you have two-factor authentication enabled for these accounts (which is considered an industry best practice and required by many different compliance standards), an easy way to manage users is by using either the two-factor vendor’s provided administrative controls dashboard or by using administrator APIs, if made available through your two-factor service.

And by using an accounts API, developers can programmatically create and delete individual two-factor user accounts under an administrator account.

###Protecting Against the Insider Threat with Two-Factor In addition to former employees exploiting old credentials, the Verizon DBIR found that insiders would also elevate privileges by stealing other employee credentials, circumvent controls and use social engineering and malware like keyloggers and backdoors as hacking techniques to get to the information they wanted.

Protecting against the threat of stolen credentials and elevation of user privileges is pretty straightforward with the use of two-factor - by choosing the authentication option of push notification, an administrator can ensure only he/she has access to their account by tying access approval to their personal smartphone. So even if another employee within the same company is trying to log into an administrator’s account, they wouldn’t be able to without access to their personal device.

A quote from InformationSecurityBuzz.com states that:

But instead of trying to manage, generate and rely solely on the complexity of passwords to protect your accounts and data, imagine a world where two-factor authentication can provide a reliable security defense without requiring frequent updates and oversight.